I think the real beauty of “Till Then” is the simplicity and idea of just regular people with the everyday foibles and difficulties. And particularly now when our W WH Generation are leaving us. Those who are­still around are in their 90’sat least. In a very short period of time they won’t be here at all.

I know as a quasi­historian myself, I would really love to get that kind of information on folks that it’s no longer available from. What would you give to be able to interview somebody who was actually in the Battle of Gettysburg or Bunker Hill or Belleau Wood? And not .just on the Battle. That one way or another we can dig out of the history books. To a certain degree we can find out a lot about the individuals who led the battles, the generals, etc. What about the everyday guy who’s worried about his family and when General Lee might pose another attack and if the family at home had enough to eat. Letters like that on soldiers of the Civil War, the Revolutionary War, the War of 1812 are lost history in most cases.

Here we have an opportunity to see a couple through the course of the war. Their feelings, their concerns, their worries, other than the obvious course of the war. Let the fact that life goes on in spite of the trials that war brings.

So this is a real piece of history actually getting down to the core, to the individual. A story that isn’t told in all the big movies other than if it’s told about generals or presidents.

I think you’ve got a wonderful piece. Congratulations. Best of luck with it. I would encourage anybody who hasn’t seen it to see it and would encourage any museum to have a copy. I know we do at Shanks and Shanks is a very small museum. But here again, it’s that piece of real history that’s a lot more valuable than body counts and things that we can read about or we have reported. 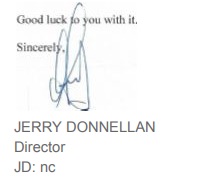