Helen and Andrew Del Regno exchanged about 600 letters during his years fighting in the Pacific. 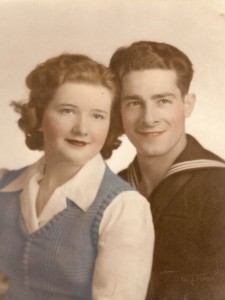 “All my thoughts will always be of you, beautiful. To me you are my very existence, all that I have left to come home to. I love you more than you’ll ever know, honey. Please be kind and give one little thought to me once in a while, honey.”

So reads a May 8, 1945, letter sent by Navy Seabee Andrew Del Regno from the Pacific to his wife, Helen, back in his hometown of Nyack.

The letter, in which he refers hopefully to World War II’s end in Europe and eagerly anticipates the fall of Japan, is part of a wartime correspondence between husband and wife while Andrew Del Regno was serving in the South Pacific.

The box of some 600 letters, found years later in the garage of the family’s New City home, is at the heart of a documentary made by their son, Vic Del Regno. He said he was encouraged to make the documentary after having the letters made into leather-bound books. 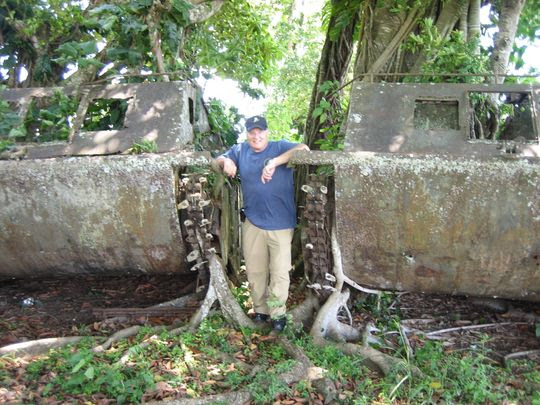 The letters’ discovery started Del Regno on a five-year journey to Guadalcanal and the Solomon Islands in the South Pacific, and then back to Nyack, to retrace his parents’ story.

Del Regno’s film, titled “Till Then: a Journey through World War II Love Letters,” “captures the deep loneliness and hardship many couples experienced during the war, caused by being separated by thousands of miles and long periods of time,” he wrote in an introduction. “This is a real life story, taken from the letters, that ties together the elements of love, betrayal, forgiveness, tragedy, and hope.”

The filmmaker, who now lives in Florida, said he wanted audiences to grasp the emotional cost of war and the sacrifices made, not just by the soldiers, but by their spouses and loved ones at home.

“It also speaks for all those who remain at home today while loved ones fight in today’s wars,” Del Regno said in an announcement from the New City Library, which will screen the documentary on Nov. 9.

Del Regno be on hand to introduce the film at the event, two days before Veterans Day. There will be a Q&A after the one-hour showing.

Brian Jennings, New City’s local history librarian, helped Del Regno find images of Rockland during World War II. Jennings was with the Nyack Library when the film premiered there in June 2013. Later that year it won the Soldiers and Sacrifice Award at the Rhode Island International Film Festival.

“The story in the film is both a deeply personal one, but it also contains an important Rockland County story about Camp Shanks, the embarkation point for over 1.5 million troops during World War II and the impact that it had upon the local community,” Jennings said. 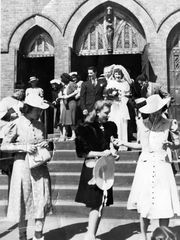 Helen and Andrew wedding at St. Ann’s Church in Nyack.

Helen Giese was 18 and Andrew Del Regno 26 when they were married at St. Ann’s Church in Nyack. They had been introduced a few years earlier by her brother Otto, who worked with Del Rego at the Gair paper company in Piermont. The couple had been married for two years when Andrew left for the South Pacific.

The documentary includes an interview with sportscaster Bob Wolff of South Nyack, who was on Banika in the Solomon Islands at the same time as Andrew Del Regno.

“Honest, honey, I’m feeling blue. I miss you so much. Why can’t we get a break so we can be together, the way I always dream about. I never knew I could love you so much, darling. So until then you’ll always be in my heart. So long beautiful.”

Robert Brum is a columnist and editor of The Rockland Angle, a nightly email newsletter exclusively for Rockland County news, features and other essential information. To sign up for The Angle, visit http://lohud.com/newsletters, check the “Rockland Angle” box and submit your email address.