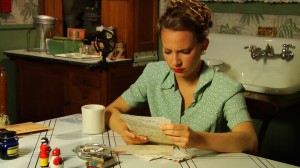 Victor Del Regno will premiere his film “Till Then: A Journey Through World War II Love Letters” at the Rhode Island International Film Festival Aug. 8 in Providence. Del Regno’s mother, Helen, is played by Arielle Kook.

SOUTH KINGSTOWN — What started as an afternoon of giggles in an attic over a box of old love letters nearly 60 years ago has turned into a one-hour film about the emotional cost of war – a tale not often told.

Seasonal Matunuck resident Victor Del Regno’s journey began five years ago after re-stumbling across the same box of his parents’ love letters. He began reading them in chronological order and realized they told an incredible story of separation during World War II – one of love, betrayal, forgiveness and tragedy.

“I saw a side of my parents I never saw, and I saw a passionate side that was never expressed openly when we were kids,” Del Regno said. “These love letters, some of them will burn in your hands. They’re so hot!”

Del Regno felt compelled to share their story with the world after a friend, who also happened to be a World War II veteran, thought it would make an incredible film. After four years of production, Del Regno will premiere his film, “Till Then: A Journey Through World War II Love Letters,” at the Rhode Island International Film Festival Aug. 8 at 6:30 p.m. at Veterans Memorial Auditorium, One Avenue of the Arts, Providence. His film was one of more than 200 films chosen to appear in the festival from a pool of more than 5,100 entries.

“The mission of the film is to share with people the emotional cost of war and a different side of war that we normally don’t see, that’s still relevant today: the stress of what separation does to couples both on the battlefield and the home front,” he said.

His parents’ story begins during the early 1940s in Nyack, N.Y., where they married – his mother Helen, 18, and his father Andrew, 26. After only two years of marriage, Andrew was shipped out to the Solomon Islands, where he served as a U.S. Navy Seabee based out of Davisville. During his three years of service, the couple exchanged 600 letters, but in the first two years Helen hardly wrote – she had gone astray.

A Nyack resident had written Andrew telling him Helen has been seen around town with soldiers. Andrew was devastated. His tent mate wrote a letter to Helen expressing his disgust with her behavior. To Del Regno’s surprise, his mother kept that letter. After returning home in December 1944, the couple reconciled their marriage, but in January Andrew was shipped out again to the Philippines. When the war ended, Andrew returned home and the couple had six children.

“When my parents patched things up, my mother became a prolific writer,” Del Regno said.

When previewing the film, Del Regno said many people are shocked and appalled by his mother’s actions. He explains that his mother was left behind as a 20-year-old woman, who lived and worked near Camp Shanks in Orangetown, N.Y. The camp, which served as a point of embarkment for troops, housed thousands of soldiers weekly. These soldiers “loaded with testosterone” strolled into town wanting to have fun, Del Regno said.

“I’ve learned to love my mother more. Not faulting her. Appreciating what she went through in the home front,” he said.

Del Regno recently met a young couple whose story is almost identical to that of his parents. The 29-year-old soldier completed two tours in Afghanistan within the first three years of his marriage. After watching the film, his wife said she was thrilled that a woman’s point of view was shown. Del Regno feels the film is therapeutic for people.

“It’s still relevant today even with technology, because when they’re in remote areas with danger, they can’t turn on the computer for security reasons. Letters and packages are just as important today, and [the couple] both expressed that, ” Del Regno said.

Del Regno teamed up with former Wickford resident Chris Simmons, co-founder of Zygote Digital Films, a video production company based in Massachusetts, to create the film. Del Regno said Simmons was with him every step of the way. Simmons even joined him on a trip to the Solomon Islands. Simmons shot footage for the film while Del Regno experienced the environment where his father spent two years serving his country.

“It’s just been a terrific journey,” Del Regno said. “We air it all, but it’s done very tastefully.”

In each letter, Del Regno’s parents “signed off” with a few lines from popular songs of their time. His parents used the words “till then” most often from the 1944-song “Till Then” by The Mills Brothers. Del Regno decided to use this for the name of the film, which also includes several other melodies from the era.

Besides the love story, the film tells other stories from the letters, including how Andrew’s brother was killed in the Battle of the Bulge. (Del Regno was named after him.)

Del Regno said he has learned so much through this film-making journey, including the power of forgiveness and how difficult it is for couples to be separated by long distance and war. His parents’ letters make him feel good, knowing they were just like anyone else, full of life and dreams.

He hopes viewers get, “a better appreciation and understanding of how [war] affects people and loved ones both away and at home, and that there are wounds, and sacrifices made in different ways to preserve our freedom.”

Del Regno said he is ecstatic that his film was chosen to be in the festival, and hopes many veterans show up as the subject matter will resonate with them. Del Regno’s father died several years ago and his mother currently suffers from Alzheimer’s Disease. She is not aware that Del Regno made a film from her love letters, but she did give him permission to take the letters from her garage after Andrew died. Although she doesn’t talk much or recognize those around her, she repeatedly asks daily, “Where is my Andrew? Where is my husband?”

“The passion I have for this legacy is not only to my parents, but to the greatest generation and to today’s soldiers,” Del Regno said. “So their story can get out and be appreciated.”