Bob Kerr
Days like this are to be savored. The small, rich details have to be gathered up and given a safe, secure place in the memory bank.

It was all good, but best of all was riding the front nine with Lou Dostou and talking about golf and World War II and other things. 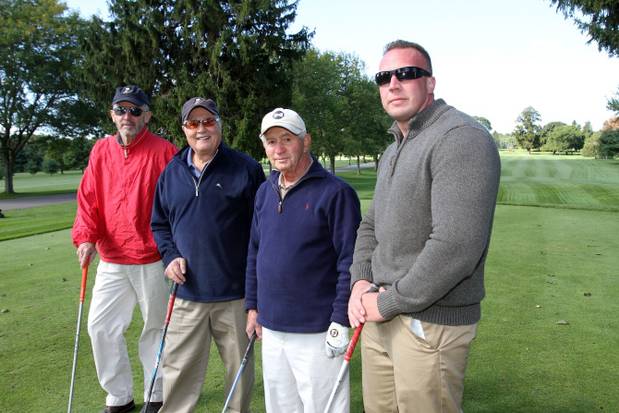 I own golf clubs. Lou plays golf.
“I’ve been playing for 60 years, I should know how,” he said.

I want to be just like him someday. I want that smooth, easy swing, and I want to watch the ball go where I want it to. And I want to make money at it just like Lou does when he beats his friend Vic Del Regno.

Lou and Vic play for cash. Vic says the college fund he’s trying to set up for his grandson is suffering because of the money he keeps handing over to Lou after 18 holes at Quidnessett Country Club.

On Tuesday, Vic folded up eight bucks and passed it across the table to Lou in the clubhouse. Another hit on that college fund.

Del Regno brought us together on that beautiful course on the Bay in North Kingstown.
We played golf and we talked and we discovered that there were three generations and four very different wars in our collective experience, and yet there was common ground.

Curt Sprengel brought a somewhat rusty golf game and some very fresh memories to the foursome. He got back from Afghanistan earlier this year. He did a tour in Iraq a few years before. His father, Jack, is the retired Seabee who is the moving force behind the wonderful, and growing, Seabee Museum at Davisville. Del Regno has been a big supporter of the museum, thus the connection.

I first met Del Regno when he invited me to his house in Matunuck to show me the beautiful book he had created with the letters his parents wrote during World War II. His father was a Seabee.

Earlier this year, at the Rhode Island International Film Festival, Del Regno showed the film “Till Then” that he produced and that was also based on the letters. And part of it was shot in one of those big, cumbersome canvas tents that were standard for World War II. The tent was set up on the grounds of the Seabee Museum.
There were all kinds of good connections as we played. Lou told of how he came out of Central High School and joined the Navy. His brother Steve was in the Army in Belgium.

So he ended up on Saipan in the South Pacific in the last year of the war. He recalled, among other things, how the Marines would put fruit juice out in the broiling sun and wait for it to turn to a head-banging home brew. And he told us of the elaborate accommodations the Japanese had built for themselves in the island caves — including an officers’ swimming pool.

We talked about mail, a crucial connection for people who go to war, a reminder of what we want to get home to.

Lou remembers mail from Providence that had been censored by the time it reached the South Pacific. There were black lines through some of the writing. But he and his mother wrote their letters in Greek.

I remembered the MARS calls from Vietnam. They went through ham radio operators on the West Coast, and each person had to say “over” before the person on the other end could talk. My mother forgot to say “over” the two times I made a call.
We figured Curt had Skype and email, but he said some of the places he was stationed in Afghanistan didn’t allow for either. So he brought home a bundle of war letters.
Curt’s a big, rugged guy who became a Department of Defense police officer when he got back from Afghanistan. He’s assigned to Newport.

“Today is awesome,” he said as we relaxed after the round. “A Vietnam vet, a World War II vet. There are a lot of similar stories in some respects, even though there were different times.”

He graduated from North Kingstown High School and worked at Electric Boat. But he saw the war on TV and it bothered him not be a part of it. He went to a recruiter for the Rhode Island National Guard. He said he wanted to be a military policeman and be in Iraq within a year. The Guard came through for him.

In Iraq, the troops were more “off the leash” than in Afghanistan, he said.

There are things about coming home that bother him. He hates to see young kids “punking off” a vet.
“The biggest thing is that society is so disconnected,” he said.
“People have no clue what you’ve gone through.”

Lou remembers no such problems. He came back to Providence on a train and went to work. He still works in the family business, New England Coffee. And he plays golf at Quidnessett and occasionally relieves Vic Del Regno of a few bucks.
“I’m his ATM machine,” says Del Regno.

Lou lost his wife, Helen, last year. They had been married for 55 years.
“It’s tough,” he said.

We played some golf on a golden late summer day and talked about war a little bit and about our work and our families and about the way the golf ball can follow a cruel path over the cup and way, way down the green.

When Lou added up the score, it came as no great surprise that he had beaten me.
So it’s embarrassing to lose to an 86-year-old man, right?

Wrong. This time, it’s an honor — definitely an honor.