‘Till Then’: A son’s film unfolds WWII’s personal side

NYACK — Vic Del Regno’s journey started with a box of old love letters and turned into a labor of love.

Five years ago, the Nyack native decided to tell the story of his parents’ trying marriage during World War II, but soon realized he was really making a documentary about the “emotional cost of war.”

“The story is not just about my parents, but is also about ‘the greatest generation,’ and how loneliness and separation for long periods of time affected many relationships,” Del Regno said in an email interview. “It shows how really important receiving a letter was, and how it became a lifeline helping to keep the relationship together, whether on the battlefield or the home front.” 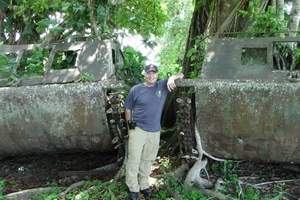 Vic Del Regno on Guadalcanal, an island in the Solomon Islands and the site of a famous World War II battle, in 2010 for his film.

Even the date the film will be shown has special significance.

June 6 is the anniversary of the D-Day invasion, which occurred in 1944 when 160,000 Allied troops landed in Normandy, France, and began to advance across Europe to battle the Axis powers in Germany and Italy.

“Many of the troops who fought in the historical invasion and battle came through Camp Shanks in Orangetown,” said Del Regno, 65, who left Rockland County in 1973 and now lives in both Rhode Island and Florida with his wife, Theresa.

More than 1.3 million soldiers would pass through the Camp Shanks complex from 1943 to 1945 before heading down the Piermont Pier onto ships that would ultimately carry them halfway around the world.

Del Regno’s mother, Helen, was among the millions of women left behind. Her husband, Andrew, was dispatched to the Solomon Islands, where he served as a Navy Seabee, which built infrastructure like airfields and bases to support arriving Marines.

The couple were married just two years when Andrew Del Regno shipped out to the South Pacific. They exchanged nearly 600 letters during his three years of service. The letters’ contents confessed troubled times and heartache but in the end, reconciliation and love.

For Vic Del Regno, it was a side of his parents’ relationship he knew nothing about until one day in 2007 — long after his father had died — when he pulled out a box of World War II letters from a damp, dark garage and began reading. He ultimately felt compelled to share their story, even though they didn’t always depict his parents favorably.

“We shouldn’t be so judgmental, since many couples were so young and lonely, they made mistakes,” Del Regno said. “Thank God for forgiveness, which saved so many of those relationships after the war was over, or probably many of us wouldn’t be here.”

Margaret DeGroat Renella wound up being interviewed by Del Regno after she read a Journal News article about his project that appeared on Memorial Day 2012 and contacted him. The 86-year-old Nyack native volunteered at the USO club in Nyack, which is currently the home of the Runcible Spoon Bakery.

DeGroat Renella, who today is in failing health, and her husband were also friendly with the Del Regno family.

“They talked for three hours on the phone about Nyack and its history,” said her son, Jim Renella. “Then (Del Regno) came to Nyack and interviewed her for four hours. … So it brought back a lot of good memories for her.”

Del Regno, a retired CEO of a food sales and marketing company, said he has spent more than $400,000 of his own money to make the documentary, which he hopes will one day air on a cable channel. He and his wife have traveled overseas and given thousands of hours directing, re-editing scripts and supervising film edits.

Brian Jennings, Nyack Library’s local history librarian, has worked with Del Regno over several years to compile still images of Nyack, Camp Shanks and other key locations in Rockland during World War II. He said he was eager to see the film, particularly since he has a box full of World War II letters from his grandfather after he was newly married. He has been reluctant to read them because he felt as though he were “intruding.”

“We talk about ‘the greatest generation,’ but it’s much more real when it’s your parents or your neighbor,” Jennings said. “There’s a local appeal, but (World War II) is something that touched the whole world.”